Jude 8-11
CIT – Jude describes the apostates that are infiltrating the church.
10-25-06am
First Swartz
INTRODUCTION:
Dreams can be good or bad –
Think about the sewing machine. Elias Howe had just about given up on the whole project. He just could not decide where to put the eye of the needle. He had a dream one night that he was being lead to execution for failing to design a sewing machine for the king of a strange country.
He was surrounded by guards who carried unusual spears, they were spears that were pierced through the head. He woke up, realizing instantly that this was the solution to his problem. By morning he had completed the design of the first sewing machine.

Another dream – this one was disturbing. Just a week before he was assassinated, Abraham Lincoln had a dream that he was walking through a silent white house toward the sound of someone sobbing. When he entered the east room he was confronted by the sight of a coffin covered in black. He asked the guard on duty there who was dead, and the soldier said, “The president of the United States.”

We read tonight about some dreamers – very dangerous dreamers. Apostates and false prophets who were infiltrating the church. Notice what Jude says about them.

Most often this refers to false prophets.
Jer. 23:25 “I have heard what the prophets have said who prophesy falsely in my name, saying “I had a dream, I had a dream.”

“a confused state of the soul or abnormal imagination, producing delusions and sensual confusion. These men’s minds were numb to the truth. . . they fantasized wicked perversions, being blind and deaf to reality and truth. Perhaps they falsely claimed these dreams were from God.”
J. McArthur

The end result of their apostasy is alarming. Jude lists three.
A) THEY DEFILE THEIR FLESH – Literally they pollute their own bodies. Perhaps in their dreams they believed that God was telling them it was okay to commit sexual sins. The word describes an infection or a contamination. They are unclean because of their sin. They claim to know God, yet they live ungodly and immoral lives.

The apostate kills his conscience. He sins so often that he no longer feels any guilt or conviction. ILLUS: David Berg the founder of the family or the Children of God – Many of his beliefs sound biblical. Until you get to this - . IL In a lengthy and sexually explicit series of missives claiming that God had now sanctified extra-marital sex and prostitution as long as they were "done in love" and "for the glory of God."

They become unfit for worship and for service.
They become dangerous to those around them. They become deviant and warped – sin leading to sin. 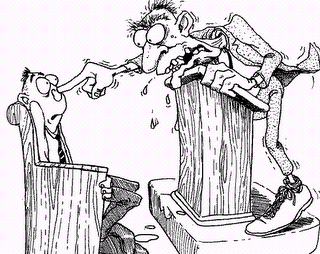 The past few months have left me with no time to sit down and blog. I’ve been in Russia for a mission trip, working hard at preaching and leading the church, and neck deep in family affairs. My goal is to blog at least once a week, but with eight kids and a busy church, that can be daunting task!

I’ve been reading an excellent book by Derek Prime and Alister Begg entitled On Being a Pastor. Over the years I’ve read quite a few good books on pastoral ministry, but few that equaled this one. On Being a Pastor is a wonderful mix of pastoral theology and practical application. Perhaps the best chapter is chapter three titled, the Goals and priorities of pastoral ministry. The thrust of the chapter is that the Church is first and foremost Christ’s church. He owns the church by right of creation and redemption. Therefore success must be measured by God’s standard, which of course, is Scripture. This is a much needed correction in our day of church growth conferences and strategies. Pastors must measure success by church health, not necessarily attendance. Don’t get wrong, numbers are meaningful. Each number represents a soul. But what we do with the number of people that God entrusts us with is the measure of success. The authors provide six goals or priorities for pastor who intends to be faithful to God’s calling on his life.

First he must feed the flock. Through the preaching and teaching of the Word of God every pastor is called by God to provide solid Biblical nourishment for the congregation. Second, he must preach the whole counsel of God by faithfully expounding Scripture in its fullness. Both the Old and New Testaments provide truth that our people need in order to be healthy. Third our goal is to present everyone perfect in Christ. What matters most is not the number of people sitting in our pews, but the character and maturity of those people. Fourth, preachers are to prepare God’s people for works of service. Good preaching equips folk for the work of the ministry. No member should be left behind as we help them find and utilize their giftedness. Fifth, we must equip people to be fishers of men. A church that is zealous for God’s glory is zealous for evangelism. Every church should provide its members with training in evangelism. Finally, pastors are to keep watch over themselves and their people. The pastor must guard his own life and keep careful watch for false teaching and unrepentant sin. God help all pastors to be faithful to his goals and priorities.
Posted by collin wimberly at 9:33 PM No comments: